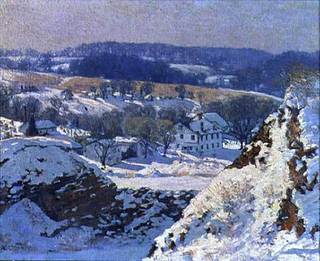 Rushland Quarry in Winter, Michener Art Museum (Roy Nuse)
Ollie's father was well-regarded artist Roy C. Nuse (1885–1975); his daughter, Judy Belasco, is a painter and his son, Ronald, is a photographer. Did I ever ask him about his marriage? his family? All I knew was that he had kids older than me. I didn't quite understand that people even had pasts. Stories, adventures, but not pasts. I do remember him telling me he finally figured out that work wasn't nearly as important as family. He never said things as advice, just musings. Did Ollie display his art or his father's in his place in Maine that I visited so often? If he did, I don't remember him pointing it out. Nor do I remember anyone else clueing me in.

As I was thinking about him yesterday, I realized that I think of him as fixed in the past: the year or 2 we knew each other daily, followed by me moving to New York and us falling out of touch. What changes is my view of myself in relation to him—me then, me now. I of course realize that I was pretty transparent then (& probably now, for all I know). I would like to think that he saw something in me beyond my willful hippie brattiness.
Be the first to comment
Loading…}