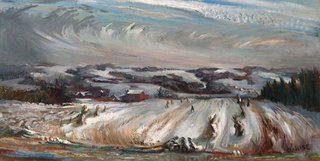 I'm the same age now as he was when we knew each other. That 38-year age difference now seems—what?—implausible? unseemly? But he was handsome, a gentleman, a snappy dresser, & interesting: a painter, filmmaker and violinist (we played duets together), who'd gotten arrested in the early '60s trying to sail to Cuba. I liked that it didn't seem as though he was that much ahead of me: that he wasn't emotionally smarter. I thought of him as the first grownup who still had questions and doubts, which reassured me as I headed into adulthood. What a cool thing it was that he hung around, entirely without condescension, with so many of us who were a lot younger. I wish I'd paid more attention.

I have always felt bad that when our neighbor told me Ollie was dressing up for our date, I laughed. I laughed because we were secretly already involved, but she thought I was, well, callow, & reprimanded me, as though I couldn't tell that he was sweet on me & needed to be told to be kind. However, when he told me he remembered World War I, it did seem like he might be too old for me.

The last time I saw Ollie must have been a year or 2 before he died. I ran into him at the Farnsworth Museum in Rockland, Maine. He was with his second wife (his first, Eleanor, had died only a year or 2 before I met him), but managed to slip away from her long enough to kiss me hard.

Did he know that he mattered to me? that I would think about him all my life? I was too young! too young! He shouldn't have given me all that power.
Be the first to comment
Loading…}