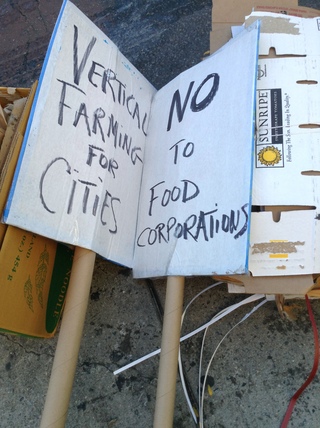 Going to an antiwar (Vietnam) demonstration in Washington D.C. in 1971 changed my life—I met people who are still friends, it opened my mind to different lives (you're not in school? you work?!), & it was the start of my education: I realized that saying "war is bad because children get killed" to someone who thought the war a geopolitical necessity wasn't all that effective (hey, I was 19 & it was pre–oh, you know, pre–the days when kids know everything).

These days I'm less hopeful (& more claustrophobic about big crowds). Less hopeful that my presence is being counted, my shouts are being heard. Is showing up with a sign enough? "A thousand people in the street / Singing songs and carrying signs / Mostly saying, "hooray for our side."

I think of the unintended consequences of so many of our actions: good out of bad, bad out of good. How we all have different emphases for what should be done and done first. How what seems right or obvious to me might be topsy-turvy in a lot of environments. Cast your eye anywhere in the world or on any era, & you can see that it's true.

I ended a poem once with a line I don't think anyone realized was satiric. It was about talking on the phone till 3 a.m. & hanging up, "having accomplished a great deal." Did the Climate March accomplish a great deal? I hope so. Of course I hope so. For what it's worth.
Be the first to comment
Loading…}