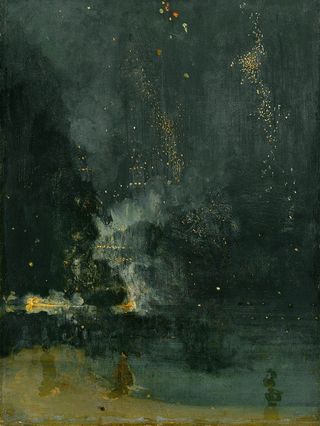 Nocturne in Black and Gold: The Falling Rocket (1875), by James McNeill Whistler
Fireworks are like birthdays. You grab ‘em as they go by or you don’t, and if you miss them, that’s it, the carousel doesn’t wallop you around again anytime soon. Look up! Look up, they’re bright, surprising, free, and like my niece said when she was 3, about pink, they “mean nothing.” They mean nothing the way cumulous clouds, or a poem in a bus, or spaghetti with oil and garlic mean nothing—or everything. Hating birthdays is like hating fireworks is like hating all the little joys that give life beauty & mystery.

Fireworks were invented in China, no later than the 7th century, and China is still the largest manufacturer and exporter in the world. They use noise, light, smoke and floating materials (such as confetti) to get effects. They may burn with flames and sparks of many colors.

Philip Butler, who married into the Grucci family, said in the National Geographic that after 30 years in the business the closest he can come to explaining the human attraction to fireworks is that we have a primal attraction to fire. “If you go on a camping trip you must have a campfire and you are mesmerized by it,” he said. “That is the same attraction we put in the sky with colors and it does the same thing. During the show people are mesmerized.”

Two memories:
In 2007, my birthday fell on Chinese New Year, and for once, fireworks were set off in Chinatown. It’s the only time it was every legally done, as far as I remember. The thrill of walking just a few blocks from my house & getting both fireworks and birthday at one & the same time!

Once, maybe in the 1990s, Maggie & I were bike-riding in lower Manhattan. Maybe we headed down to the Brooklyn Bridge because we knew this event was scheduled, but it’s possible that it was a random route—I remember asking the cops why the FDR Drive was blocked to traffic. The Gruccis (?) were commemorating (?). I seem to remember we thought it was for the Fourth of July even though we were a little too far away from that date. It wasn’t the Brooklyn Bridge centennial or quasquicentennial. The highlights were a silvery waterfall that cascaded over the Bridge—possibly the single most beautiful firework I have ever seen—and not being in a crowd: everyone had a front row view.