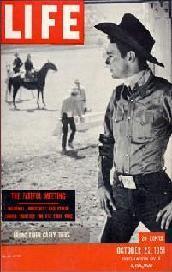 Casey Tibbs, rodeo champion
What I remember: Being little, 4 or 5, standing on the front porch of our stucco & brick house at 1503 S. Summit Ave in Sioux Falls, & watching a parade go by, featuring Casey Tibbs, my mother in her early 30s sighing in such a way that I understood she had a crush on him.

The truth: probably none of this, except that he was handsome. Why would there have been a parade on our street? And Tibbs was from South Dakota, so he likely passed through town regularly. Maybe we saw him once at the airport?

From CaseyTibbs.com: "Casey has been described as being to rodeo what Babe Ruth and Lou Gehrig were to baseball, what Jack Dempsey and Muhammad Ali were to boxing and what Red Grange was to football." More soberly, the NYT obituary wrote: "Because of his flamboyant personal style, which included purple Cadillacs and a flashy wardrobe, Mr. Tibbs was often credited with bringing professional rodeo to national attention."

He died in 1990 and is buried in Fort Pierre, home of the Casey Tibbs Rodeo Center.

P.s.: My mother says in fact she didn't like him because she once saw his (very beautiful) wife crying at the airport & her mother saying, Don't worry, he won't do it in public. But maybe he did something at Augustana & we did see him on Summit, she added, although a parade was more likely on Phillips.
Be the first to comment
Loading…}