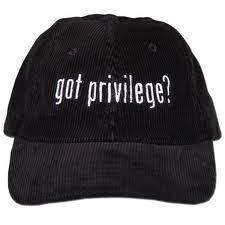 A friend objected when I called her kids "privileged" because they go to private school. There's more diversity at their school, she said, than at the local public school, and many students get financial aid. Perhaps I should have said "lucky" or "fortunate" or "blessed." Perhaps "privilege" implies that one's advantages come at the expense of others.

I myself feel extremely privileged, given that I have a low rent and my times is, for the most part, my own. That's not most people's definition of privilege, it seems: They value money over time. I live in a hovel, so in their eyes my claiming to be privileged is eccentric.

It's a little dicier when someone has what people admire or covet: Another friend who got a big (deserved!) grant now has to take into account that people envy her. She can no longer be whimsical or careless in talking about money.

But it's not just about money, and I would like to change the terms of the discussion about privilege. When I was broke, I didn't say I was poor—because I still had access to money. That's a big difference. I have white privilege, educational privilege, accent privilege, intact nuclear family privilege, and on and on. Many people look at those with more and feel deprived. I strive to see myself in terms of those who have less. Or, as Epictetus more elegantly put it: He is a wise man who does not grieve for the things which he has not, but rejoices for those which he has."