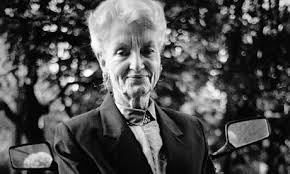 Almost the only time she snapped at me was once when I said drugs saved me—launched me from a predictable to an exciting life; she had seen drugs' destructiveness too close up to let that one go.

Here's a characteristic email, maybe the last I got from her:

Elinor—so happy to hear news of you and Alex. Gosh, darling little Zoe graduating from high school—well, I guess. Is the the gorgeous girl she was as a toddler? Ah, what a lovely window you opened to the past. I had recently run across the photos you gave me and the ones I took with that filming idea and the ones I took when you took me to Maine.

My memory is so poor—I have lived too long—and I am trying to think why I was in NYC such a long time then. I remember staying at Alex’s apt for a weekend alone, I think, when she was elsewhere. I remember going in a rowboat on the Hudson to a ship some friend of a friend was renovating to make into a nightclub, I remember the Flying somebodies, visiting jazz cafes in the village—all dim memories. Then you took me to Maine. (I never did get that romantic lobster dinner promised—just that huge waitress in that metal café—still good lobster no one shared)

It was a fabulous time, and I do love the village. Your place so small, but I am over the moon you still have your love—gosh.

So, bless your heart—thanks for remembering me.