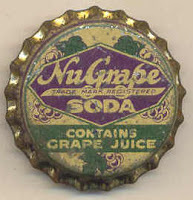 I’m a bit obsessed with this little-known act from the mid-1920s. It’s possible the Nugrape Twins were Matthew and Mark Little, born September 16, 1888, in Tennille, Georgia. Matthew died in 1962 and Mark in 1965. I’ve heard at least one commenter say they were black. I don’t think so but it’s often hard to tell with rural blues singers.

I’m pretty sure I have their complete oeuvre—only six songs. Far and away the best is “I Got Your Ice Cold Nugrape.” They also recorded the similar “Nugrape—A Flavor You Can’t Forget” and four gospel songs: “The Road Is Rough and Rocky,” “Can’t You Watch for Me One Hour” (I can’t make out the lyrics so I’m only guessing it’s gospel), “There’s a City Built of Mansions” and “Pray Children If You Want to Go to Heaven.”

I think it’s their not-quite harmonies: equally alarming and compelling. Equally sweet and rough, their voices. And the lyrics are pretty funny:

and:
What’s that make your lips go flippity-floppa
When you drink a NuGrape you don’t know when to stop
I got your ice-cold NuGrape

and:
If from work you come home late
Rolling pin waits at the gate
Smile and ‘prise her with NuGrape
Then you’ll sneak through in good shape
I got your ice-cold NuGrape…

As for the soda: It was invented in 1906 and first bottled in 1921. It’s available—still!—in the southeastern United States—Georgia, North Carolina, northwest Alabama, and the eastern half of Tennessee. Wikipedia adds the weirdly specific information that NuGrape is “almost impossible to find for sale west or north of Murfreesboro, Tennessee.”

Were the Twins hired to record a song some company genius wrote? Did they come up with it hoping to get a free case or two?

The company’s ad calls it the Culpable Grape, which didn’t make much sense until I looked again at their festive font and realized it is actually Gulpable.
20 Comments

What evidence exists to believe that the Twins were the Littles? How and where were the recordings discovered? I love this music.

Thanks for your comment! I have been able to discover very little about them. The suggestion that they were the Littles was here: http://www.last.fm/music/Nugrape+Twins. This link—http://www.wirz.de/music/nugrafrm.htm—says "In the Columbia files, this session [March 25, 1927] is credited to "Mark and Matthew (The Nugrape Twins)." I don't know how to find out more. My best guess is that they weren't big or important enough, or didn't record enough, for anyone to have tracked down more about them. I wish I could tell you more. I'm so glad you like them—they do get into your head, don't they?

I'm driving to Tennille Ga tomorrow just to see if anyone there has any info. I dont have high expectations but will be fun and you never know. i did find that Mark Little is buried in the Marietta National cemetery outside Atlanta and Matthew Little JR dies on 4/28/2014.

This is so exciting! Will you please, please let me know what you find out? If you email me [Elinor[at]ElinorNauen[dot]com], I can (try to) send you a file of my band covering their song. Your adventure reminds me that last spring I found Pink Anderson's grave in Spartanburg: http://www.elinornauen.com/blog.htm?tag=Pink+Anderson. He obviously isn't as obscure but still it was pretty cool. In general, I am interested in brother & sister acts, so maybe that's why I'm hoping the NuGrape Twins are really twins. Anyway, have a fun trip!

The Nu-Grape Twins were indeed twins and, despite some photos, they were African-American. I'm not sure how their names got tied to the Nu-Grape Twins title, but I'm pretty sure it's correct, because the 1930 census shows a Mark Little listed as working as an "Advertiser" for the "Nu-Grape Plant" in Georgia. All other records corresponding to these two, as well as the 1930 census itself, shows them to be WWI veterans. They're both buried in the Marietta National Cemetery. Both born Sep 16, 1888.

Thank you, Caroline! Little by little (no pun intended), the mystery is getting solved. Very exciting.

It is not the worlds best grape soda ... the song is better than the real deal. I have been doing this song for years using a full bottle of Nugrape that I have had for over 25 years. About 15 years ago I was in Jamaica and I saw a Nu Grape bottling plant there. If you visit Montego Bay you should be able to have some NuGrape on the beach.

thanks, Dave, for this! I have no doubt you're right, given that the song is a masterpiece; grape soda is hideous (in my opinion).

As it turns out, my local Ace Hardware in Minnesota sells a variety of vintage pop (that's what we call it up here), including NuGrape. I bought it because I had heard the song somewhere in my exploration of early blues recordings. I just finished the 12-oz bottle, and assuming it tastes now like it did in the '20s, it's very grapey, and sweeter than Grape Crush. I would think you could order it online.

Where in Minnesota? My family is there (we're from South Dakota) & I'm out there all the time. I might give it a try....

thanks for this bit of info! This has been such an interesting sleuthing project! Do you know anything more about him?

Levi B. Byron (c. 1901–1945?) was an Atlantan who is listed in early-1920s city directories as a musician. He is the piano accompanist on at least some of the Nugrape Twins' records.

Thank you, Tony Russell! I am excited every time I find out a little bit more about them. Where did you find this, may I ask? I guess I should try to find an actual record (were they 78s in those days?) & see if there's more info on the label or jacket.

Tony Russell is correct about Levi B. Byron as an Atlantan. As to his musical background, that seems to surface later in his life. He was the son of another older Levi B., a shoemaker whose listings in the directory go back to the 1890"s and the father of yet another Levi B. Our L.B.B. was listed as a letter carrier in the 1930 census living in the household of his wife's stepfather, Robert Currington, a long term postal/government employee. The directories for Atlanta through the late 1930's list Levi B. as a "carrier". In the 1940 census he is listed as a teacher, WPA school. In the 1944 directory he is listed as a musician and 1945 as a musical teacher. His death date is uncertain as there appears to be no listing in the Georgia death index for him. The 1948 directory listing lists a Lewis B. Byron with wife Ruby connected to the "all negro cultural league", while there is a separate listing for a Mrs. Ruby Byron, a seamstress at a different home address than the above mentioned. By 1951, Mrs. Ruby D. Byron was listed as the widow of Levy B. Byron. Mrs. Byron died in 1956. Assuming the Nu Grape twins are Mark and Mathew Little, the question remains of how they became connected with Byron. Checking of addresses over the years via the directory might show residential closeness of the men. Examination of the Georgia service card records of the Little brothers from WW1 and draft registration in 1917 helps to narrow these Little's from others of the like name. Hope this helps. I'll keep at it. Richard Linster

Thank you, Richard Linster, for adding another bit of information!

Mathew Little's WW 1 service card states that he was born in Tennille (on card Tennelle). Was living in Wrightsville, GA when inducted into the service.

Thank you, Sandy Mercer! I love finding out this information.

Hi Everyone! Does anyone know if the NuGrape twins actually wrote "Pray Children If You Want To Go To Heaven"? I'm trying to find out who has the publishing rights, but so far, my 6+ hours of research has turned up nothing. Since it appears that no one is claiming copyrights to the song, is it possible it was a song they sang in churches at the time? My guess is that this song was never registered with the US Copyright office or whatever it was called at the time. Any information that anyone would like to share would be helpful. Thanks!

Hello Brother Enos, I wonder, even if it had ever been copyrighted, wouldn't it have expired by now, over 90 years after it was released? That's all I can think of.