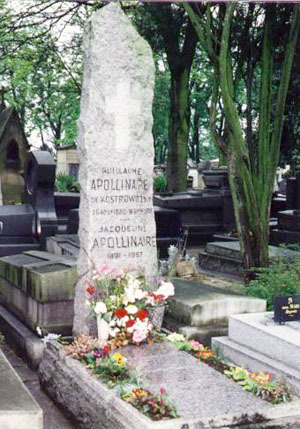 The NYT & BBC both are covering WWI
No discussion of WWI is complete without noting that it was a war fought by all strata of society, including the educated and rich. One reason many of us still feel so connected to this war is that we have so much eloquent writing by participants, including one of the greatest novels of the 20th century, Ford Madox Ford's tetralogy Parade's End.

Apollinaire (who was trepanned; weakened, he died of influenza in 1918) could be said to be the first modern poet. He has a tall modern jagged headstone at Père Lachaise in Paris—I went there with Maggie and an old man helped us find Apollinaire's grave, excited that we weren't there for Jim Morrison.

WWI decimated that generation of artists the way the AIDS epidemic did ours.

My interest is also linked to the fact that my father was a little boy in Berlin during WWI and my mother's father fought for England. My grandfather, Charles John Phillips, died in 1937, at age 51 or 52, in part, I understand, because of the effects of having been gassed. World War I is much more part of my family's history than the Civil War, for example, given that neither anyone I'm related to nor the place I grew up was in the States in the 19th century.