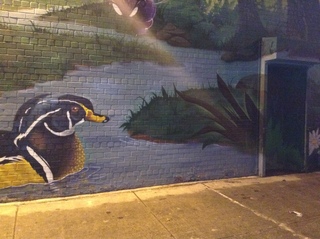 A third of the mural. See the door to gauge its size.
I remember something I don't like about snow, and that is when businesses don't bother to clear it away; eventually—predictably!—the snow turns to slush turns to bumpy, slippy, dangerous ice. The worst offender near me is the Rite-Aid on my corner. They usually manage to clear in front of their store on First Avenue but neglect the long 5th Street sidewalk.

I've been trying to get them to be responsible about it for years. Sometimes they lie: It's not our responsibility (wrong); no one told us (no one told you you're not two-dimensional? no one told you if you're on a corner you have two sidewalks?) I've gone to the precinct, called 311 (the city ombudsman—Bloomberg's best achievement), emailed. I called the district manager, who was unresponsive, & used my journalism skills to track down a senior VP at corporate HQ. Then my calls were returned.

Today the sidewalk was bad. I called the store, was put on hold two separate times, not transferred, lied to. The usual. The new manager, your basic CYA yes-man, wasn't in today & no one would admit to being in charge. A guy who came out said he's put down salt. I said, Yes, but it's still iced over. Yes, but I put down the salt. Yes, but it hasn't done its job. Yes, but—.

I suppose I could mention the long long checkout lines, the staff who can't be bothered to so much as thank you, let alone help. The mural on the side of the building is nice, though, & the door is finally easy to open.
Be the first to comment
Loading…}