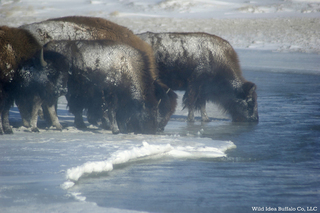 Buffalo for the Broken Heart.
I first knew of Dan O'Brien from reading his excellent short stories. Then I discovered he owned a ranch in South Dakota & got more interested yet. He's a naturalist, environmentalist, & endangered-species biologist who almost 20 years ago switched from raising cattle to buffalo, acting on his belief that returning buffalo to the northern plains would help restore the land to "an American Serengeti, complete with migrating herds of many species of large herbivores, predators, birds, and scavengers," he writes in Buffalo for the Broken Heart. "But the Great Plains is not an American Serengeti. It is an abused and subsidized landscape."

He talks about this as a rancher, someone supplying meat to ethical eaters around the country, and someone who is trying to make the Great Plains wholesome again. "Think what it would cost to restore all the damaged land of the West to health and understand that that is a residual cost of land abuse. The final payment for America's cheap food of the last century is still outstanding."

From his website:
The foundation of our mission is preserving the Great Plains ecosystem by returning buffalo back to their native homeland. In 1997, the Wild Idea Buffalo Company was founded to pursue this mission and offer an alternative to the industrialized food system. The idea was simple: supply delicious, healthy, 100% grass-fed meat to consumers interested in sustainability.

Preserving and restoring the Great Plains grasslands is the foundation of the Wild Idea Buffalo Company. In 1997, in an effort to restore his battered 1,000-acre ranch back to health, Dan O’Brien returned bison, North America’s largest herbivore, to the native rangeland of his ranch. Dan’s holistic management approaches, along with the bison’s ability to regenerate and nurture the soil naturally, have revitalized damaged prairies. Now grasses, sedges, forbs, and flowers flourish, and once again contribute to a sustainable eco-system for indigenous creatures....
Be the first to comment
Loading…}