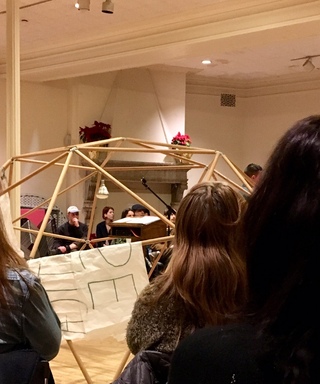 Geodesic dome in the Parish Hall.
This was a very strange event. I'm not sure I exactly liked or followed, but I felt like if I'd seen it 40 years ago it would have changed my work forever. Strange to have two such different reactions simultaneously. One problem was that it was impossible to hear any of the film's audio & the transcripts were small & went by too fast.

Here's what the Project said about the evening:

Charas as Infinite Thought Object
The history of dome building on the Lower East Side goes back to when CHARAS built domes in collaboration with Buckminster Fuller in 1972/73. Syeus Mottel documented this effort in his photojournalism book CHARAS; THE IMPROBABLE DOME BUILDERS, first published in 1973 and now re-published in 2018 by Song Cave Press & Pioneer Works.

On 1.9.19, The Poetry Project, will stage a performative action between artist, and researcher Matthew Mottel and poet Edwin Torres. Torres has been an active member of the Loisaida community since the 90’s, where he’s performed his ‘lingualisualist’ poetics, rooted in sight and sound, at many iconic venues. Mottel, has been a member of the experimental arts community of New York City since the late 1990’s.

In interviewing Chino Garcia (co-founder of CHARAS), Matthew was told that one of the domes CHARAS built in the 1970’s was portable and used as sites for experimental performance. In this spirit,Mottel and Torres will perform in and around a Geodesic Dome built inside the Poetry Project.

Mottel will screen a documentary video on the history of CHARAS’s dome building activity. And Torres will perform from his recent book, “XOETEOX: THE INFINITE WORD OBJECT” (Wave Books) within a sonically & visually-charged geodesic environment.

As the finale of the evening, the two will collaborate in and around the dome. This event will further expand the narrative of CHARAS’s original dome actions, to pair with contemporary performance and poetics, and to champion new forms with new content. This collaboration was facilitated by The Loisaida Center, who introduced the artists and hosted Mottel’s exhibition ‘Charas is alive on Spaceship Earth’ in May – June 2018.

This event is co-sponsored by The Loisaida Center and The Greenwich Village Society for Historic Preservation.
Be the first to comment
Loading…}