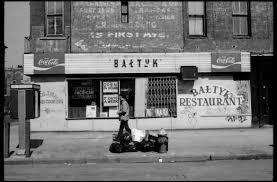 The Baltyk was right across the street from me.
Now that Café Orlin is no more, I don't really have a go-to lunch place in the neighborhood. It has to be quiet & reasonably priced. I don't care if the food's not great, although it's better if it is. I'm meeting someone in a couple of days & the best we could come up with is Odessa. Veselka's too noisy now & expensive, and I miss the days when you could take over the back room & maybe a couple of people would order coffee & that'd be enough to keep them from kicking us all out.

I remember when there used to be so many Ukrainian & Polish places you had a different one for everything: Polonia for breakfast special, Kiev for late night running into people, Christine's for pierogis, or was that Teresa’s? I know there was another one that was for soup. The Baltyk I went to only because my brother was inexplicably in love with all the old thick-ankled waitresses. I go to B&H because I love the people who work there & the food, but it’s not for hanging around.

I’m thinking of Phil Whalen saying if you want to write a long poem you have to go to the same bar every day, which maybe someone else said? & now there’s not even a damn diner.

Here's some more on the topic from Jeremiah's Vanishing New York blog:
A June 1986 New York magazine article recalls the days when, on a Sunday morning, you could not get into the Kiev because the tables were jammed with customers. This was during a boom in Polish and Ukrainian coffee shops in the East Village, what they called a "Blintz-Krieg." Today, it's hard to imagine cheap Slavic food being a culinary goldmine here. "Though the East Village seems in danger of becoming one huge art bar," says the article, "ethnic coffee shops prove that people there do not live on attitude alone."

At that time, three Polish coffee shops had opened in the last six months, bringing the neighborhood's total to over a dozen Eastern European diners. The magazine lists old-timers Leshko's and Odessa (a crowded "money machine"), then Polonia, Christine's, Lilian's, and K.K.'s, plus Bruno's, Teresa's, and Jolanta.

"They see us getting rich," said the co-owner of Christine's about his competition. Bruno of Bruno's agreed, "There's a lot of money in Polish food."
Be the first to comment
Loading…}