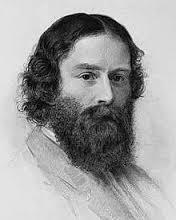 Soulful poet
Our milkman when I was very little was named Jim Lowell. He would give us rides in his truck, one of those old milk trucks with no doors and no front seats. He would creep along at 1 mph for about 10 feet. Nothing I relished more than standing up in a moving vehicle.

So it was not at all surprising to me that my elementary school, James Russell Lowell School, was named after a hero like him.

What was surprising was finding out that James Russell Lowell was someone else entirely. I don’t recall spending any time on the poet at Lowell School, except to memorize his most famous line: “And what is so rare as a day in June? Then, if ever, come perfect days”—lines that I still repeat automatically on every lovely late spring day.

While I had never read more than that (from “The Vision of Sir Launfal”), I had assumed, in that origin-less manner where we get so many of our beliefs, that Lowell had never been a shining poetic light. In fact, Lowell—along with being a scion of the famous Cambridge family—was extremely well-regarded in his day as a lyric poet, a critic, satirist, essayist, educator, diplomat, and journalist. According to the Poetry Foundation, “The most versatile of the New Englanders during the middle of the nineteenth century, James Russell Lowell was a vital force in the history of American literature and thought during his lifetime. His range and perspicacity in literary criticism are unequalled in nineteenth-century America. He did more than anyone before Mark Twain in elevating the vernacular to a medium of serious artistic expression, and The Biglow Papers ranks among the first of political satires in American literature. His public odes expressed a mind and an outlook that drew the praise of Henry Adams, William James, and William Dean Howells.” He was also a pacifist and an outspoken abolitionist as early as the 1840s, as well as a founder of The Atlantic Monthly.

He’s long since fallen out of favor (we who love Whitman and Dickinson!)—so much that a friend of mine who has a Ph.D. in 19th-century American literature had never even heard of him. It seems it was bad luck as much as anything that put his reputation in decline. His poetry was considered too difficult, for one thing. And while he was one of the first academic critics in the U.S., the New Critics didn’t value his strengths, dismissing him as “Victorian,” “genteel,” “conservative,” and “academic.” As Joseph Conrad wrote in a 1905 essay on why some books fail: “A bridge constructed according to the rules of the art of bridge-building is certain of a long, honourable and useful career. But a book as good in its way as the bridge may perish obscurely on the very day of its birth…. This is not because some books are not worthy of enduring life, but because the formulas of art are dependent on things variable, unstable and untrustworthy; on human sympathies, on prejudices, on likes and dislikes, on the sense of virtues and the sense of propriety, on beliefs and theories that, indestructible in themselves, always change their form—often in the lifetime of one fleeting generation.”

However, Lowell may well make a comeback, as so many writers do when their stance or style once again appeals to a new generation; Robert A. Rees observed, in a survey of writings about Lowell: “No one as richly versatile and influential as Lowell will forever remain unattractive or unrewarding to scholars.”
Be the first to comment
Loading…}