The value of public conversations 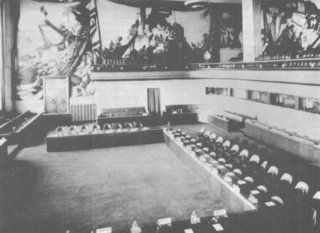 The UN, without debate.
According to economists at Michigan State University, freedom of speech may be able to prevent the economy from going downhill. Their study measured the influence on economic performance of public deliberation—from open discussions with all stakeholders to protests to public hearings—in 112 countries. They concluded that lawmaking improves when policymakers receive information from a diverse array of citizens. Making an important decision based on only 1 or 2 opinions can overlook problems and lead to flawed policies, while taking into account pros and cons raised by citizens should lead to policies that do a better job of regulating the economy and allocating resources. The end result, the economists concluded, is stable economic growth.

“At the international level, we’re talking about education, health, food and food security, and the environment—all of which are heavily affected by policy,” MSU economist Siddharth Chandra said. “We suggest that if you want to have policies that lead to outcomes that are stable and positive, you want to have a system in which there’s a lot of deliberation.”

As it happens, I'm reading a book called Unlearning Liberty: Campus Censorship and the End of American Debate by Greg Lukianoff of FIRE, the Foundation for Individual Rights in Education. He talks about how the chilling effect of college speech codes is that people are afraid to discuss or even mention controversial ideas, & so they leave school never having been challenged, live & associate only with people they agree with, and don't see any value in expressing unpopular opinions.

This makes so much sense & answers a question a lot of folks have posed over the last few years: How is it that so many people vote against their own self-interest? I guess a lack of being called to account for their ideology prevents them from seeing that there might be a better way to go about things.
Be the first to comment
Loading…}