Snow was general all over Ireland 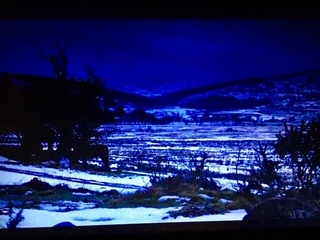 Near the end of The Dead.
I just watched The Dead, read Joyce's story, then watched the film again. Fascinating to see how much was identical & how much differed. I feel like it's a movie that mostly poets love, like Paterson. I loved hearing the Irish accents of Johnny's mother in some of the characters & feel bad that in our early days I mocked him (he still mocks me for the way I can't say roof) for his inheritance of saying many words without the "h"—he said "true" for "through" and "everyting" when I first knew him but mostly got rid of that. It slips out sometimes & I think from now on it will always make me tink of snow falling on all the living and the dead.

"The time had come for him to set out on his journey westward. Yes, the newspapers were right: snow was general all over Ireland. It was falling on every part of the dark central plain, on the treeless hills, falling softly upon the Bog of Allen and, farther westward, softly falling into the dark mutinous Shannon waves. It was falling, too, upon every part of the lonely churchyard on the hill where Michael Furey lay buried. It lay thickly drifted on the crooked crosses and headstones, on the spears of the little gate, on the barren thorns. His soul swooned slowly as he heard the snow falling faintly through the universe and faintly falling, like the descent of their last end, upon all the living and the dead."
Be the first to comment
Loading…}