Strolled over to Tibor de Nagy gallery to get a burst of spring in the flower paintings & watercolors of Nell Blaine (1922-1996). She had polio as an adult & had to relearn to paint, left-handed. Imagine that! Show is there till April 24.

Johnny & I went over to Tibor to see some Rudy Burckhardt photos & films, where we also said hello to Trevor Winkfield & came home with his lovely Nine Portraits. At the corner of 2nd & 2nd two cars barrelled through the light, almost hitting a mail carrier. We did a little wowing about his close call & then had a sweet New York City post-moment chat, finding the people we both knew. "I took over this route from Eddie," Phillip said. "Bart is your carrier if you're on the Ave." Yep, I said, & we talked about Eddie & Bart & accidents & funerals. He thought the two cars were trying to catch up to a funeral procession. "But they're only a block or 2 behind, they didn't need to run the light at top speed." We didn't want to part. I would have gone to his funeral. It felt like a special day, to see a man not get run over!

I came back to the news that one of the StoptheSteal organizers, a convicted felon (for theft!) said three Republican (of course) CONGRESSMEN were part of organizing the assault on the Capitol—Mo Brooks, idiot of Alabama, and Paul Gosar & Andy Briggs, both of Arizona. I can't imagine sinking lower than to want to destroy the government you work for, that you were elected to serve. Treasonaires. If it's true, & there seems to be video evidence, they should be expelled & tried.

It was a great neighborhood day & a horrifying national day. I am going out of my mind. All summer I had little problem avoiding the doom-scrolling that consumed so many of my friends. But this insurrection, sedition, riot, whatever you call it, has me riveted. I take it as a personal assault on my father, a refugee who loved & appreciate the country that had saved his life. I don't want to stop believing that's the country I live in. 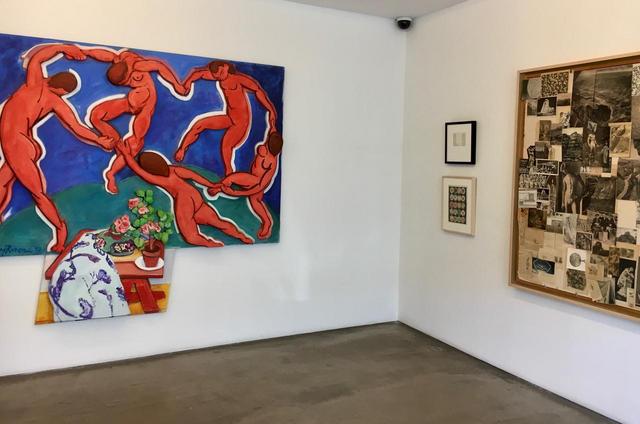 Larry Rivers on the left, Jess is the big collage on the right.

It was a summer day like they always were. We dragged ourselves through the hot streets to Tibor de Nagy, to see their happy new show of Old Friends (John Ashbery, Biala, Nell Blaine, Joe Brainard, Rudy Burckhardt, Donald Evans, Jane Freilicher, Shirley Jaffe, Jess (Collins), Louisa Matthíasdóttir, Larry Rivers, Louis Stettner, Neil Welliver). One work each & a pleasure they were. Catching up with Andy & Liz was great too.

Then we sat in the park & started (so late!) our summer read: The Aeneid. We haven't decided among translations of Dryden, Fitzgerald, & Fagles. Or is that a law firm? I also have a dual-language edition that is more like a crib than a translation, but Johnny, once a Latin scholar, will no longer countenance it. The first conversation we ever had was an argument about Latin pronunciation—my public school Latin vs his Catholic school Latin.

The first summer day of 2020 that was like our 30+ years of summer days. How could I be happier? 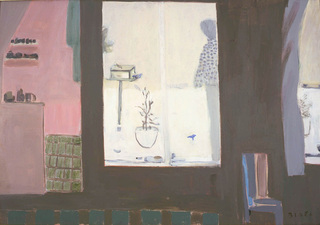 The Yard in Winter, only $40,000. Oh sugar daddy, what have you done for me lately?
I first took notice of the painter Biala, first name Janice I once heard, in connection with Ford Madox Ford, but she is terrific in her own right. What a pleasure to see the well-chosen show at Tibor de Nagy yesterday. Several small paintings of bouquets, a few large landscapes, this Bonnard-esque interior-exterior. Her work is self-confident in the way of someone with nothing to prove.

Tibor de Nagy's principal, Andy Arnot, said Biala was Ford's literary executor. I wonder what happened to his daughters. Did they have any connection to his estate later in life? I wonder how I can find out more than their birth & death dates.