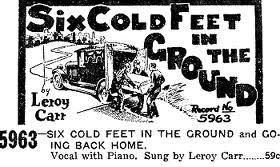 His music, most of it recorded with guitarist Scrapper Blackwell, has been covered by  Read More
Be the first to comment
Loading…}