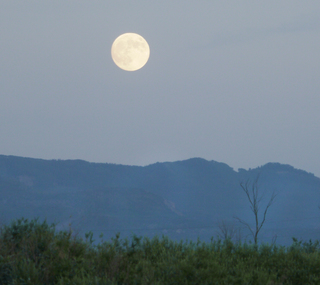 Photo by Jadina Lilien. Click here to see more of her work.
Last night's full moon (& Jadina's gorgeous photo) made me think of going to see Joan Baez at the outdoor amphitheater Red Rocks in Denver in I'm guessing 1972. I think we went because we'd heard Bob Dylan was going to show up as much as to see her. I remember her laughing about having been a soprano, & it's true her voice had settled a little by then (she was all of 31). Each row in turn gasped as the giant full moon rose behind her, until she stopped & asked what was going on.

The only other time I went to Red Rocks was to see the teenage guru Maharaj Ji. For fun & out of curiosity. Someone I met later was envious & said that once I'd been in his presence, I would eventually accept him as my guru. Still waitin'.  Read More
Be the first to comment
Loading…}