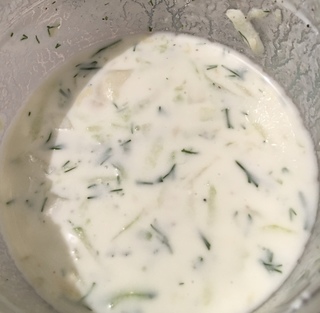 Signs of summer: wanting to go home after walking 20 feet & lie down in the air conditioning; people wearing wisps of clothing; cucumber soup from B&H, my favorite restaurant. It's made with buttermilk, a dash of cream, lots of fresh chunks of cucumber, a little dill. Quenching!

I learned enough Polish to thank Bagushka, who makes the soup, but then instead of "tasty soup," I could only remember how to say, "I am an old woman" ("jestem stara kobieta"). So I said that to her by way of thanks, & one of the Mexican guys who works there turned & said, You're not an old woman! How do YOU speak Polish? I wanted to know. He shrugged: I work in delis.

And there you have a great New York story to go with the fact that B&H, a kosher restaurant, is owned by a Muslim couple who are Egyptian and Polish.