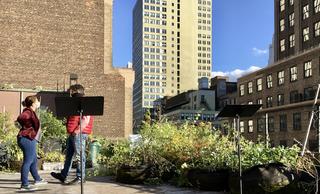 It wasn't any random roof, it was in the West 30s where Upstart Creatures decided to try out LIVE THEATER. Carefully. Everyone in the cast was tested a day or two before, seats were 6' apart & the actors (who unmasked only when they spoke) were 10' away from the audience. We had our temperatures taken on arrival (dang it, even though I rode my bike & was overheated, I still didn't get anywhere near 98°).

The play was Oedipus Tyrannus—a flawed leader during a plague. Brilliant but I think I would have been happy if I were watching a play in Flemish. It was so good to be around others, communally watching theater happen. I don't suppose I've ever appreciated live theater so much.

Amazing! I used to love Shakespeare in the Parking Lot - perhaps it will return next year, when I´ll be in town? xo

I thought of that too!