That explains we can go somewhere very very other & still take everything along: wherever you go, there you are. But why you can also, if you allow it to happen, have your mind blown. If I let myself feel foreign, anything can happen. Hint: it's wonderful. Or an adventure, anyway. Feeling foreign is how we remember to feel alive.  Read More
Be the first to comment

Tags: Robert Louis Stevenson
It is in virtue of his own desires and curiosities that any man continues to exist with even patience, that he is charmed by the look of things and people, and that he wakens every morning with a renewed appetite for work and pleasure. Desire and curiosity are the two eyes through which he sees the world in the most enchanted colours…and the man may squander his estate and come to beggary, but if he keeps these two amulets he is still rich in the possibilities of pleasure.” —Robert Louis Stevenson Read More
Be the first to comment 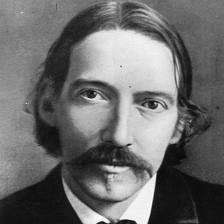 When Doug & Alice moved to Paris in 1992, Alice gave me a fancy coat, a hand-me-down from Lita Hornick, & a book of Troubador poems; Doug gave me a set of the works of Robert Louis Stevenson (1850-94), 26 volumes published by Charles Scribner's Sons in 1903. As with the Encyclopedia Britannica, I know that I could get the complete Stevenson on my iPod for a buck or 2, but these are beautiful & pristine and make me wonder who else besides Doug ever opened them.

Stevenson, by the way, is a really good writer, who had pretty enlightened politics. Yesterday in Across the Plains, he deplored the prejudice against the Chinese ("Their forefathers watched the stars before mine had begun to keep pigs") and Indians ("a chapter of injustice and indignity such as a man must be in some ways base if his heart will suffer him to pardon or forget").  Read More
Be the first to comment
Loading…}