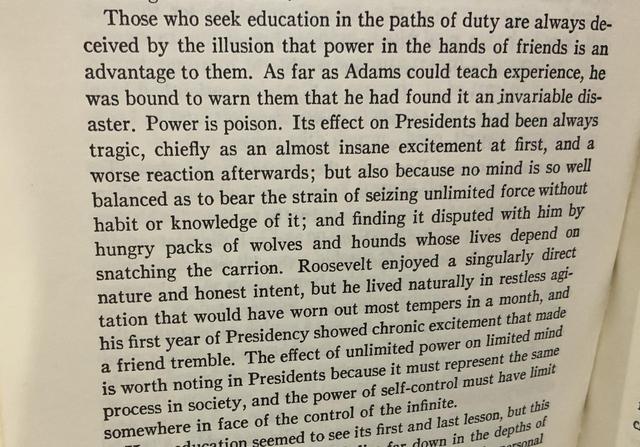 More Henry Adams. The last few chapters have been so allusive as to be mystifying but all in all enough gems that I keep reading. And anyway, I'm only a few chapters from the end. Anyone want my copy when I'm done?

One day when Adams was pleading with a Cabinet officer for patience and tact in dealing with Representatives, the Secretary impatiently broke out: "You can't use tact with a Congressman! A Congressman is a hog! You must take a stick and hit him on the snout!"

The most troublesome task of a reform President was that of bringing the Senate back to decency.

I'm reading with huge enjoyment The Education of Henry Adams. These are both quotes from the chapter on President Grant, but there are frequent observations that seem just as timely as they must have 150 years ago. And it's interesting to be the fly on the wall of diplomatic maneuvers in England during the Civil War when his father (son of President John Quincy Adams) was representing the federal government there. This is just one example of his wry take on affairs of the day.