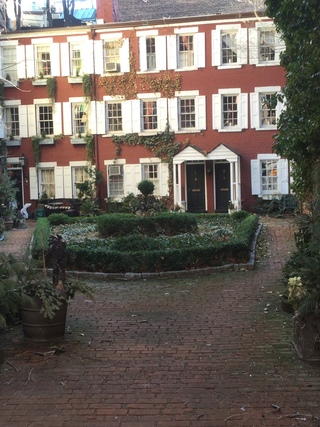 Landmarks of New York.
How is it I never saw Grove Court before? Set back off of Grove Street, between Hudson and Bedford in the West Village, it is so unexpected to come upon as we were strolling around.

I've since discovered that this beautiful, charming set of houses was the least desirable place to live in mid-19th century New York City (they were built 1848–54). They "lacked all the vestiges of respectability—the houses were small, lacked the stoops so common among the brownstones of the day, and, most glaringly, were devoid of any prestigious street frontage." Its denizens were so poor that they couldn't afford a proper pint of ale and "had to resort to drinking a foul concoction—the nasty dregs that remained in their local barkeeps' beer barrel. Literally the 'bottom of the barrel.' Hence Grove Court's old moniker—'Mixed Ale Alley.' (It was also referred to as 'Pig Alley.')" Read More
Be the first to comment
Loading…}