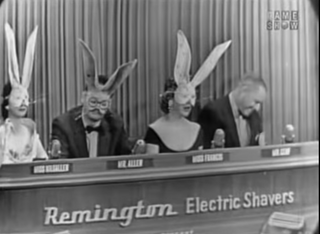 For some reason, I've been watching episodes of What's My Line? from the 1950s & 60s. You see the show change—the poet Louis Untermeyer was a panelist at the start, very awkwardly making semi-literary jokes, for example. Eventually the panelists got much better about getting on with things. It's fascinating to see the stars of the day, many of whom I had to look up: Fred Allen, Hal Block, Robert Q Lewis, Peter Lind Hayes, Susan Oakland. Richard Kollmar (Dorothy Kilgallen's husband). It was very cozy. For example, Bennett Cerf recused himself from one of the celebrity guests (where the panelists were blindfolded) when he thought he knew who it was, & confirmed by asking if they would be having lunch the next day. They all seemed to know & socialize, they all wore fancy dress, & in a way it was the original show about nothing. It wasn't exactly sophisticated or funny but it's such a time capsule of the times: the clothes, the manners, the assumptions. The big surprise occupation pretty often was a woman in a "man's" job—mayor, justice of the peace, barber—& they always guessed much lowlier jobs.