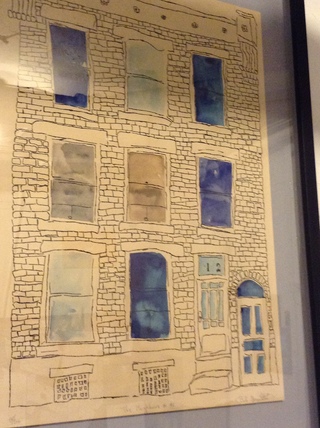 In 1971 I was living in Severn, Maryland, with a bunch of Air Force friends who worked at NSA. We were only about 20 miles from Annapolis & used to visit a lot. One day I went in a frame shop & saw this print. I fell in love with it, and visited it regularly until I moved away in the fall. A few years later, I was passing through Annapolis & found the same store. The guy said hmmmm, went in the back, & pulled out the picture I had loved. I bought it—the first artwork I ever bought.

Finally, all these years later, I've replaced its cracked plexiglass & cheap poster frame with a good frame, falling in love with it all over again.

When I first saw "The Neighbours # 142" I had never been in a city. Once I moved to New York, I saw how this picture predicted my life. I also never thought to look up the artist, but now that I have—well, I haven't found him yet.  Read More
Be the first to comment
Loading…}