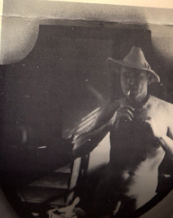 Mr. May. Click to read The True Story of the KOFF Calendar.
22 poets, 65 minutes of Bill Kushner's poems & good-humored presence last night at the Poetry Project. Kudos to Peter Bushyeager, Ed Foster, and Lewis Warsh for a lovely selected, Wake Me When It's Over.

An underrated poet: why? Because of his friendliness & modesty? Who has written anything better than "My Father's Death"? 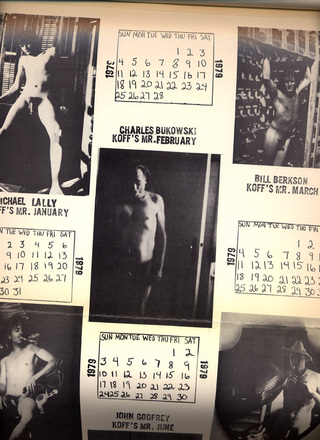 Bill, bottom right.
Bill Kushner (1931–2015) was hilarious, loyal, loving, "an expert flirt" (Todd Colby) & most of all, a poet. A good poet. He was also, I think, happy, in the way of someone who feels like he got more than he ever expected.

The New Year's Day Marathon at the Poetry Project won't be the same without Bill sitting in the front row from the first reader till—well, way past my endurance point.

The best picture ever of Bill was the one we took for the 1979 KOFF calendar. "He was magnificent. The light fell onto him like cream onto porridge."

Bill has been part of my poetry world since I got to New York. I've known him well over half my life. I will miss him.  Read More
Be the first to comment
Loading…}