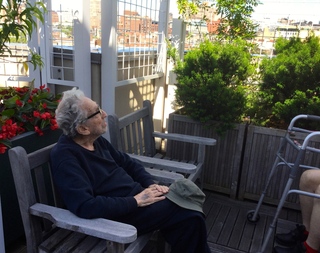 Albert on the roof of Village Care in the West Village
Johnny's roommate at rehab was 90-year-old Albert Bennett, who had all his hair & hearing, so it was hard to believe he was 90. He also had wonderful, attentive friends—I could see why, given that I fell in love with him right away.

A fourth-generation Californian, he is originally from a well-to-do enclave in Oakland, where his writer-aunt Harriet Levy introduced Gertrude Stein to Alice B. Toklas. His mother's letters home from her year (1912) in Paris meeting Picasso, Matisse, among others, were  Read More
1 Comments