The old days (South of the Border I) 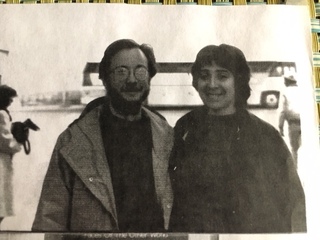 It's 40 years to the week if not day that I set off for Costa Rica. First I got a rideboard ride from NYC to Oklahoma to meet up with Mark. It was in a VW Thing, which doesn't have real windows only vinyl sheets. Whoever was driving had to do so half into a sleeping bag. I seem to remember that the driver stopped to get the heat fixed because it was so miserable.

In Tennessee I was excited to order biscuits with gravy, which I did whenever we stopped until the driver decided he had to try them. Ugh! he spat. No wonder crackers are so dumb. Which was a non sequitur as well as offensive.

Mark & I flew from OK City to Austin. His mother, I remember, dropped us off at the airport several hours early. There wasn't even a coffee shop there. We stayed with his uncle then took a Greyhound to San Antonio & from there to Laredo on the border. We crossed for the evening to Nuevo Lardeo (no fuss in those days) & I remember not being able to decipher markers of class: were we in a well-to-do neighborhood or a poor one? That was the beginning of my education.