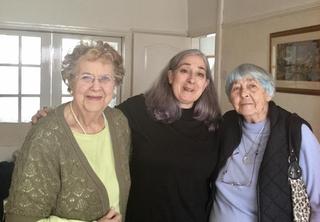 My mom (Joyce), Hazel, Beryl, & Pat were cousins who were close in age & grew up together in Liverpool. Joyce (daughter of Jack Phillips) married an American GI & moved to the States, while Hazel & Beryl (daughters of Ernie) & Pat (daughter of Maud) stayed in Liverpool. I didn't know that side of the family as well as the Woodlands, my grandmother's side, but I got to know Hazel when she flew on her own to Arizona for my mother's 90th birthday celebration, she herself only a couple months shy of 90. She lit up the room with her blue hair, her jokes & her joie de vivre. When I visited her in Liverpool a couple of years later, I was expecting to sit around & look at family photos but she whirled me around the area (what a lead foot driver!), to Lewis Carroll's childhood church, a park, historic spots. the Cathedral, & to the house my mother had grown up in & Anfield Cemetery across the road, where my granddad & numerous other relatives are buried.

The day I had train tickets from Edinburgh to Liverpool to see her this March was the day I had to scramble for a flight back to New York. I was disappointed but planned to go back as soon as it was possible. Then came her news that she was "yellow as a banana." Then an operation & daily morphine & today an email from her son with the sad news. As my mother said, She was a darling.

She sounds so lovely and fun. So sorry Ike.

I love that picture. Thanks for sharing a little about her.
Sending love and condolences.