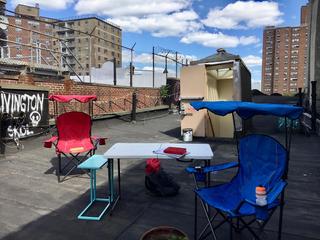 Much is terrible, but much isn't. We may be locked down, but we have our spacious roof & houdahs.

I see many of my Facebook friends (& their friends) saying they're ejecting everyone who hasn't spoken up this week about what's going on with Black Lives & the police & demonstrations. I get that. You want to know who your allies are. (I most definitely have noticed the VERY few times anyone non-Jewish condemned antisemitism in the news.)

Part of me feels that it's not doing a whole lot & that if you don't already know where I stand, are you going to believe me if this is the first time I've made a speech on the subject? And if companies, cops, people aren't going to DO something, CHANGE something, is there any more to it than virtue signaling? Even the most fiery black man among my acquaintances is only now telling some of the harrowing stories from his own life. Would it have made a difference if he had said this before?

I donated to the Equal Justice Initiative. It's what I can DO. Do you also need to know what I think, when whites are being asked to listen? when so many others have been so eloquent, thoughtful, passionate? when I haven't felt that I had anything to add?