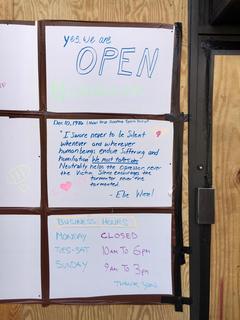 Broken glass in (apparently) Jewish businesses—Moishe's & B&H for two—is hitting me hard. I feel Krystallnacht in my guts.

The quote in the second box is from Elie Wiesel: "I swore never to be silent whenever human beings endure suffering and humiliation. We must take sides. Neutrality helps the oppressor, never the victim. Silence encourages the tormentor, never the tormented."

I decided that too, when I once long ago didn't speak up. It was at someone else's family gathering, & I let a racist uncle go on & on. That's when I realized there's always a valid reason to keep quiet: it's his family not mine, he'll never change, did I even hear what I think I heard. I realized those weren't in fact valid reasons, just excuses.

Since then, most of the time, I simply say that I don't want to get into an argument but I do want to go on record that I don't agree, & then I try to change the subject. That usually works, (no one has ever hit me or anything,) & a couple of times people actually heard what they were saying, what they had most likely been repeating without listening to themselves for years. These days, though, it seems way more discouraging, when people I would expect to act better don't, & no one seems to be willing to listen to a different p.o.v.

And the helicopters, & the curfew, & how broken we are.