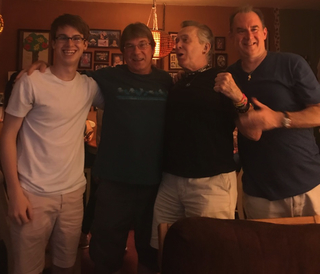 Johnny's from an Irish "18 & Out" family. Traditionally, as soon as a son gets old enough, he has a fight (I'm talking about shoving & punching—this is not done with words) with his father & leaves home. They may reconcile but they more or less never speak again.

That's what Johnny did, only he was 15: cutting his sons off at 18 was a step up. Johnny left home & lived at the Catholic Worker, where he hawked their newspaper ("Catholic Worker! Only a penny!"), got his girlfriend pregnant, graduated from Catholic school, went to college & so on.

(By way of contrast, when I was 20 & living in Maine, one of the guys I was living with asked who I'd been on the phone with just then. My folks, I said. I thought you weren't speaking to them...? With no sense of irony, I said, Just because I'm not speaking to them doesn't mean I don't check in every week.)