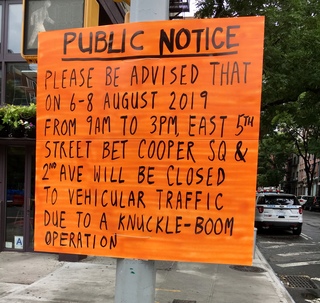 Robyn knew what this thrilling operation was all about—construction.

My computer has been in the shop & now is like new, with a replacement trackpad & hard drive. It's almost exactly the same except for a a few glitches that I'm trying to fix.

Kid Sean came over & he helped clean my office & came with me to the Brickman for light-blocking film for my windows—& I discovered a spray paint that makes them opaque. I probably got a brain tumor spraying them today but now light gets in & people can't really make out what's going on in my office. Which is in a half-basement, putting the windows at street level. I've had black curtains for years. Right now I feel exposed but I think I'll get used to it.

I had class & Sylvie & Robyn & I went to a cool show on Ludlow Street, a young Pakistani-Canadian painter whose name I don't know, sort of a more vibrant Lichtenstein.

Sunday was beach training, a nap, & then we saw Once Upon a Time in Hollywood, which I liked much more than I expected to & it didn't seem long at all.

So this is, like, 10 blog posts rolled into one.