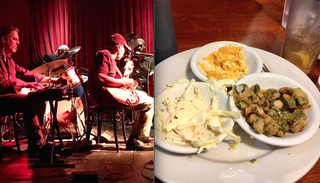 (L) Dynamic 75-year-old guitar player Andy Story. (R) Coleslaw, mac'n'cheese, fried okra.
I don't get up to Harlem much but my friend's boyfriend was playing in a band so up I went. I don't even know the name of the bar—it was up a steep flight of stairs, that's all I can say.

Even though it took 3 trains, a shuttle bus, & an hour to get home, I'd go back.

Don't think I can say the same about Amy Ruth's indifferent Southern cooking. I was pretty excited to find a "meat & 3" here in New York. I've only had the 3-sides vegetable plate way south of the Mason-Dixon line. I've been eating in places like that since Steve introduced me to the Southside Café in Spartanburg in 1971. Sides generally include mac'n'cheese, coleslaw, collard and/or turnip greens (made with meat, usually ham), mashed potatoes, candied yams, & lots more, sometimes pie even—very little that's green or healthy. At Wade's in Spartanburg, it's 4 sides for $7.75; at Amy Ruth's in Harlem it was 3 for $15.95 & no friendliness.

It's possible that you have to be in the South to eat Southern.
Be the first to comment
Loading…}