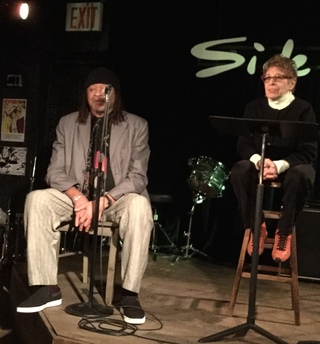 I don't know why I don't write more frequently about the series Martha King & I have been hosting for 10 years now. Last night the readers were Quincy Troupe & Hettie Jones. Quincy read from his memoir Miles and Me (he also wrote Miles Davis's autobiography) & a short piece about doing the last interview with James Baldwin. He's a wonderful writer & reader, and the nicest person. I have read with him a couple of times & always enjoyed talking about our midwestern roots (South Dakota, St Louis) and poets & poetry.

Hettie read from her new book of letters between her & the artist Helene Dorn. Even though Hettie emphasized the two women's travails in the Beat subculture of the 1950s and 60s, what she referred to as Boyland, in the Q&A afterwards, someone asked about "Ed Dorn's wife" as though Helene Dorn's personhood & work existed only in that one context. Hettie's obituary will no doubt similarly be headlined with her relationship (brief & ancient) with Amiri Baraka (né LeRoi Jones). Sigh.
Be the first to comment
Loading…}