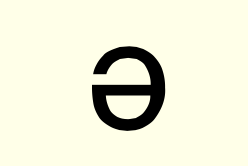 Remember the schwa?
What is it about schwa? Friends who are my age love the schwa, that upside-down “e” that represents the “uh” sound of an unstressed vowel. It was as much a part of a ‘50s childhood as the Mickey Mouse club. Seeing the word schwa the other day in an online scrabble game zoomed me right back to grade school.

Maybe it’s that it was my first clue to the innards of language. That language—written language, anyway—was constructed, and there were people keeping an eye on how it was built. And I loved that there was a word for a sound I had never noticed. Somehow it made the world seem big and full of possibility.

The word schwa—don’t you love saying schwa? go ahead: schwa! schwa! schwa!—is from the Hebrew and was introduced into European linguistics by Jacob Grimm in the early 19th century. It’s the most common vowel sound in English. It’s also been called the murmur vowel, the indeterminate vowel, the neutral vowel, the obscure vowel, and the natural vowel.

The web magazine Mental Floss pointed out that English has a tendency to delete a syllable with a schwa, as in choc-late, cam-ra, and diff-rent, a process called schwa syncope or schwa deletion. There’s also something called schwa epenthesis, which is when an extra schwa meanders its way into words: ath-a-lete, real-a-tor.

My friend Ann said she learned the schwa symbol very early, “and it made me really happy—because I remembered writing letters upside down and backwards when I learned to write—not on purpose, just struggling with the representation—and later, on purpose (when I read that Leonardo Da Vinci's notebooks were all written in mirror writing!).”

I think that upside-down e was part of what was so great about schwa, as though we were being encouraged to color outside the lines. It was so wrong and yet it was RIGHT. ə
Be the first to comment
Loading…}