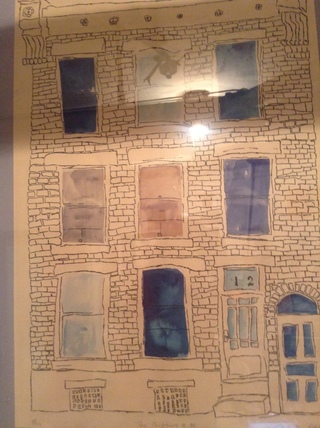 I fell in love with this picture in Annapolis, years before I'd ever been in a city. I bought it after I moved into the Ezra Pound, the building it predicted.
I’ve lived in my apartment in the Ezra Pound since January 1977. For that entire time, I’ve frequently told people that the reason the tub is in the kitchen is that the building was put up before indoor plumbing, so when it was added, there was no place for the tub except the middle of the kitchen, in my case between the stove & the (only) sink. The toilet is separate, & when I moved in, some of the toilets still had the entrance in the hall.

I was wrong, I’ve recently learned.

I live in what was once a cold-water flat (a rare American use of "flat" for apartment, I think). The tub was in the kitchen, next to the source of water & a place to heat it. The toilet was in the hall so as to disturb the fewest number of people during the night, since my small two-room apartment may have housed half a dozen or more people. Also, space was at a premium for them, as it is for us—having a whole separate room for a tub people didn't often use made no sense. (And keep in mind that people have historically thought bathing was a health hazard. In 1835, the Common Council of Philadelphia almost banned wintertime bathing. Ten years later, Boston forbade bathing except on specific medical advice.) We have a board over the tub & it serves as a shelf, cutting board, and table, with storage underneath, and no doubt earlier tenants (the Pound was built in 1910) had a similar arrangement.

At least this is my new theory, based on looking into the history of plumbing in the United States.

In the 1860s only about 5 percent of American houses had running water. Driven by epidemics of cholera, typhoid, and yellow fever, diseases spread by polluted water, that increased by 1890 to a quarter of American dwellings. However, as late as 1897, over 90 percent of the families in tenements had no baths and had to wash in hallway sinks or courtyard hydrants. By 1920, 80 percent of American houses, particularly those in rural areas, still lacked indoor flush toilets.

Apartment houses only became acceptable for middle-class people in the late 19th century, and not until the early 20th century did the wealthy begin to move in. So the first multiple dwellings were tenements—that is, buildings specifically erected to house large numbers of poor families with few amenities. They first appeared in the 1830s or ‘40s, and in large numbers in the 1860s and ‘70s, primarily on the Lower East Side and lower Manhattan, as more and more poor immigrants arrived in New York City. At first there were almost no laws regulating construction. In the early 1860s, fire escapes and fireproof common walls were required—laws that were largely ignored by owners.

Even in the present day, with our mania for (over)showering, some 1.6 million Americans—630,000 households—lack complete plumbing facilities, meaning they don’t have a toilet, a tub or shower, and/or running water. They’re largely on Indian reservations, in Appalachia and Alabama, along the Rio Grande in Texas, and in parts of Alaska.

If we were to move out of the Pound, no one would rent our apartment without a full renovation that would most of all include installing a real bathroom. In the 1970s, maybe because we were closer to the days when lots of people still had outhouses (in 1950 a quarter of U.S. homes did not have a flush toilet) and certainly because of the cheap rents, a Lower East Side landlord would have laughed you off the block if you asked for improvements like a bathroom.

I saw the best minds of my generation destroyed by madness, starving hysterical naked,
dragging themselves through the negro streets at dawn looking for an angry fix,
angel-headed hipsters burning for the ancient heavenly connection to the starry dynamo in the machinery of night,
who poverty and tatters and hollow-eyed and high sat up smoking in the supernatural darkness of cold-water flats....
—Allen Ginsberg, from Howl, 1955
Be the first to comment
Loading…}