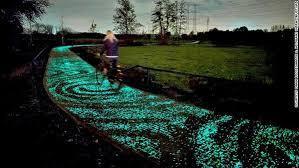 Glow-in-the-dark bike path: see the rider?
A glow-in-the-dark bike path just opened in Nuenen, Netherlands, designed by an artist named Daan Roosegaarde as homage to Van Gogh's "Starry Night." (Roosegaarde's the one who called it techno poetry.) “By incorporating lighting into the bicycle path itself, additional street lighting is unnecessary,” reads a project description, which also assures us that the "bicycle path lighting is as subtle as possible to ensure minimal intrusion on the habitat of animals." Me, I'm a sucker for luminescent & fluorescent anything, but this is particularly inspired.

Another favorite luminescence story took place soon after the Six Day War, in 1967, when soldiers patrolling the Sinai Peninsula noticed lights close to shore in the Gulf of Aqaba. Thinking they might be scuba divers from Saudi Arabia, the soldiers dropped depth bombs "only to see hundreds of small stunned fish come to the surface, with bright light emitted from organs beneath their eyes," write Thérèse Wilson & J. Woodland Hastings in Bioluminescence: Living lights, lights for living. The fish were the never-before-identified Photoblepharon steinitzi, or flashlight fish.
Be the first to comment
Loading…}