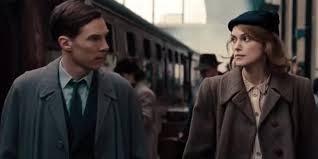 Cumberbatch & Knightley in The Imitation Game
Is it even possible to make a movie set in the past that doesn't point out how much harder it was for women then? It is, however, eminently possible to entirely ignore non-whites, especially in a British movie, I suspect. Here, they would give a few minor supporting roles to people of color, even if it were historically inaccurate.

Which is not to say I didn't like The Imitation Game—I did, a lot. (Hearing my mother's Liverpool/Manchester accent from a couple of characters was a bonus.) I'm middlebrow enough to like art that makes me feel smart without having to make an effort. In case anyone doesn't know, the movie's about Alan Turing & the long-concealed breaking of Nazi Germany's Enigma code & incidentally, the development of the computer. Also, how bad homosexuals had it.

I've liked Keira Knightley since Bend It Like Beckham & was interested in Benedict Cumberbatch because he starred in Parade's End (screenplay by Tom Stoppard), which I still haven't seen. I bet I could connect anything I write to Ford Madox Ford.