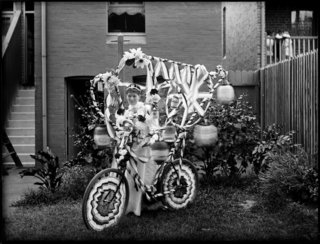 Why a horse?
* What's the deal with recurring dreams? Why does mine involve the Detroit airport? I drive a big circuit from Texas to Cleveland and back in another one.

* Accents: Why do some seem coarse or low-class? I often think that I would never have gone out with Johnny if he had a dese-dem-dose Bronx accent. Will my Norwegian get good enough that I can pick out the thugs from the wrong side of the Oslo tracks?

* How come I remember—frequently—random unimportant things from a million years ago? I remember huffing & puffing my bike up the hill on 26th Street past Christ the King Lutheran Church when I was maybe 12 & someone going by in a car yelling "get a horse!" I wonder now, for the first time, if it was someone I know. I remember Mike Plooster in 8th or 9th grade running past me up the steps of Edison Junior High and saying "get the lead out!" Hm, they do seem like the same anecdote, but I never noticed that before.

* I have so many more. I'm getting lines on my face from thinking.
Be the first to comment
Loading…}